Other Books by Tommy Hays

The Pleasure Was Mine

The Pleasure Was Mine is the story of three men: Prate Marshbanks, his grown son Newell, and his nine-year-old grandson Jackson — as they come to terms with the fading of Irene; wife and mother, heart and center of the family. Set in Greenville, South Carolina and Western North Carolina, the book is narrated by Prate, a prickly house painter who retires to care for Irene. As Prate adjusts to these life changes, Newell, a recently widowed art teacher in Asheville, needs to spend the summer at Penland, an art colony in the mountains. He leaves Jackson, his reticent, bookish son, with Prate for the summer, and Prate finds himself in the uncomfortable position of having to get to know his moody grandson.

In this, his third novel, Tommy Hays renders an unforgettable character in Prate, who, as he copes with his wife’s illness, establishes new bonds with his widowed son and grandson. This is a heartfelt, redemptive story about the power and resilience of family.The Pleasure Was Mine was a finalist for the 2006 Southern Independent Book Sellers Alliance (SIBA) Fiction Award, featured on NPR’s “Radio Reader” and SCETV-Radio’s “Southern Read”, and selected for several community-wide reading programs in various cities and counties, including Greenville, SC and Greensboro, NC.

“Once in a blessed while, in this era of edgy, postmodern fiction, you come across a novel that is old-fashioned in the best sense. … The Pleasure Was Mine is just that sort of novel — charming, unpretentious, easy to read but deeply engaging. … It’s a tender, affecting story, simply but powerfully told.” –Polly Paddock, The Charlotte Observer

“This beautifully written, bitter-sweet story is quintessentially Southern, but, like the best of Southern fiction, speaks to the heart of the human condition.” –Walter Edgar, South Carolina Public Radio

“A folksy, heartfelt paean to the deep love of a long marriage.” –Sara Isaac, The Orlando Sentinel

“Tommy Hays writes beautifully. Better yet, he is heart-true… His subject matter, his sense of the South and Southerners, his ability to reflect on the deep in the ordinary are reminiscent of James Agee’s “A Death in the Family” and Eudora Welty’s “Delta Wedding.” –Claudia Smith Brinson, The State

In the Family Way

Tommy Hays’ second novel, In the Family Way, won the Thomas Wolfe Memorial Literary Award for 2000 and was chosen for the Book of the Month Club. Set in the early 1960’s in Greenville, South Carolina, it is about Jeru Lamb, a ten-year-old, who is trying to come to terms with his brother’s death. He’s also trying to understand his mother’s conversion to Christian Science, his father’s literary ambitions (and recent calling as “a Waffle House mystic”), the racial landscape of the segregated South, and a new classmate from the wrong side of town who claims to be his half-sister. “It was not lost on me that by expecting the worst every breathing moment, I backed into prophecy once in a while,” says Jeru, and when his mother finds herself “in the family way”–against doctor’s orders–Jeru is left to wonder just what he might lose next.

“This slender book is a beautiful and haunting hymn to the meaning and power of family… In the Family Way is a sad book, with death hanging over virtually every page. But it is so full of joyous writing, wonderful scenes and characters, and sly humor, that it is nothing if not uplifting. Actually it is nothing if not an instant classic.” — Frank Reiss in the Atlanta Constitution

“There’s a certain kind of novel–charming, gentle, good-hearted–that doesn’t get much press these days. In the Family Way, by Asheville writer Tommy Hays, is a fine example that deserves all the reviewers’ ink it can get. Sweet but never cloying, affecting but never sentimental, it’s a tale that will touch your heart.” — Polly Paddock Gossett in the Charlotte Observer

“A snapshot of a Southern boy’s coming-of-age in 1960s South Carolina, Hays’ second novel clearly uses the turbulence of the decade to contextualize one family’s problems but never lets the drama of the era overwhelm the story… The welcome result is a believable young hero grappling with family life in a new way. This richly textured story triumphs with its multifaceted characters and genuinely affectionate sensitivity. — Publisher’s Weekly

“The writing is graceful, fluid and rich… People and places are described evocatively but with economy… Hays creates suspense by nuance, which gives the narrative a spare, haunting quality that never descends to sentimentality. Without ever losing the sense of reality, he manages to imbue his Greenville with a vaguely mystical quality, like looking through to the bottom of a rippling stream.” — Lawrence Goldstone in the Chicago Tribune

Set in Atlanta in the 80’s, Sam’s Crossing was Tommy Hays’ first novel. Sam and Kate are a young couple who live together in Little Five Points, an edgy neighborhood with a host of interesting and sometimes dangerous characters. Kate is a social worker in a neonatal until at Grady Hospital, Atlanta’s downtown hospital. Day in and day out, Kate has to cope with ailing infants, upset and sometimes grieving parents, truly serious matters. Sam meanwhile works in a local bookstore. He has vague ambitions to write but seems content to float in the congenial, undemanding low-key world of book displays, author signings, and customer requests. But now, after four years together, Kate wants something more. She wants marriage, a baby, “a lifetime commitment, a love that is thorough and expansive.” Sam genuinely wants to give her all these things and more–but the only thing he is confident about is his “uncanny ability to make a mess of things.” So Kate moves out, and the two of them are sent off down a bumpy, zigzag path filled with uncertainties.

“The combination of Hays’ sense of humor and honesty makes Sam’s Crossing a lively, refreshing novel. Peopled with eccentric characters, the comedy deepens, however, as Hays sensitively incorporates homelessness, interracial relationships, unplanned pregnancy and single parenthood into a story without making the book sound like a politically correct polemic… Sam’s Crossing explores the risks and rewards–the vulnerability, compromise, intimacy and strength–of love. We root for Sam and Kate, even when they’re apart, as they fight to retain the connection that defines them separately and together.” — Wendy Sheanin in the San Francisco Chronicle

“…Mr. Hays’ novel tests its characters in ways that are touching and funny–and revealing of the intricate workings of the human heart.” — Linda Barrett Osborne in The New York Times

“…one of the finest books of the new year.” — Rodney Steven in The State

“Sam’s Crossing is a rare pleasure, a novel that’s easy to read and easy to like, funny, bittersweet and real.” — Chris Kridler in The Charlotte Observer

“Sam’s Crossing is a couple of things, both of them good. It’s a page turner, and it’s the sort of first novel reviewers call promising when they really mean it slays them but the author isn’t yet famous enough for them to risk saying so.” — L. Elisabeth Beattie in the Lexington Herald-Leader 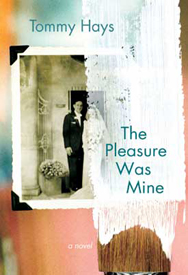 The Pleasure Was Mine is available at your local bookstore, as well as from Amazon.com, Barnes & Noble.com, IndieBound.org, and Powell's.com. 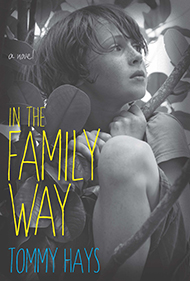 In The Family Way won the Thomas Wolfe Memorial Literary Award for 2000. It's still available in book stores, or can be purchased from Amazon.com or Barnes & Noble.com. 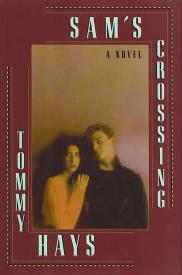 Sam's Crossing was Tommy Hays' first novel. It can be purchased from Amazon.com or Barnes & Noble.com.